The Basement is Under the Knife 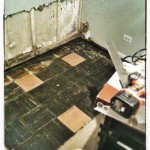 I’m doing some emergency water abatement in the studio. The drought of 2012 opened up a crack and the flood of 2013 entered into it, saturating both drywall and carpet, so I’ve cut the affected area out. I’ll be replacing part of the floor with vinyl tile and patching up the cracks with polyurethane caulk, which works quite well.

Note the dangling electrical outlet. I’m going to head out on a limb a speculate that that’s not code. There’s no outlet box; it was screwed into a furring strip and the drywall. I’ll be mitigating that situation as well.

This all opens up possibilities as to how to finish the wall. If I use 2x4s instead of the little furring strips, it will allow me to put in more bookshelves (yay) though the room will be marginally smaller and it might cause some issues with my new flooring. Happily, vinyl is easy to work with so I think it should fall within my admittedly limited skill set. Mold proof gypsum drywall will be going in as well.

In a perfect world I would dig out the foundation, put in a sump pump and…OK, it’s not a perfect world. I’m going to do what I’ve gotta do with my limited resources!

UPDATE: It won’t be pretty again for a while. I had to replace the furring strips; no 2x4s allowed, as that won’t work with the walls that remain. It’s a real PITA! A hammer drill had to be borrowed and progress is slow…