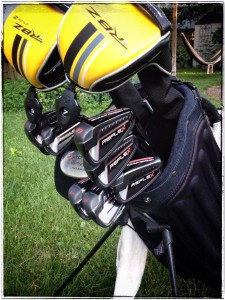 After almost twenty years of golf hacking, I recently bought my first new set of irons. I have owned a couple of used sets, including some Ping ISI’s that I never really warmed up to. The lie angles were too upright and the shafts were too stiff; they just didn’t feel good, though I tried my best to love them.

I reverted to my old Jumbo Z IIs, oversized Ping knock offs that were custom made for someone back in the 90s. They were, in golf geek parlance, shovels–big and bulky but also quite forgiving. I liked them well enough but I decided it might be nice to join up with the current decade, gearwise.
Thus began a rather long search for affordable, reliable clubs with good reviews.

I decided not to go with custom club fitting, though it’s a weighty subject in the golfing universe. After talking to several fitters and hearing what it entailed and how much it cost, I decided that my modest skills wouldn’t make it a good investment. By using online calculators it became clear that a guy who is 6’1″ with an average build will be fine with standard length, standard lie, regular flex clubs. That realization saved me $150 for an iron fitting alone. They want another $150 for woods. I didn’t even ask about the putter.

After much research and web crawling I decided to buy Wilson Reflex Irons. What? Not Wilson/Staff, the high end line? No. The plain old Wilsons are fine, thanks. Not TaylorMade Rocketballz, like your fairway metals, you ask? Not those cool black Adams sticks? No again. Too spendy. In fact, I tried out a set of used Adams hybrid clubs but didn’t take to them. They felt sort of clunky and the shafts were too short. Again, they were someone else’s clubs. I was going to give up when I stumbled on some online threads about the TaylorMade Rockeballz basically stealing the very old Wilson Reflex technology, a slot in the bottom of the club. What this slot is supposed to do I have no clue, but I followed a link and found the latest Reflex clubs. Interestingly, they are sold only one place: Dick’s. It’s strange to not find anything on Amazon or eBay but I didn’t. Only Dick’s have them as far as I could tell. Wilson is obviously not spending a ton of money marketing these clubs, but I have no problem with that since it only adds to the cost.

I went to the local Dick’s and took a look and liked them immediately. They were on sale, though I ended up buying them online. Shipping was free but tax was not. Still, they came to just north of $160 for a 4-G (gap wedge) set. I like that they are true irons and not hybrid irons. I also like the black and red Mordor color scheme, which screams “badass” to me.

The next test of goodness came at the driving range. They had a solid, tight feel and by the end of a bucket I was clicking them nicely. Next up? The course. I’m looking forward to it and will feel very confident with Reflexes in the bag!

Update: I’ve been playing the Wilson Reflex irons for two years and am very happy with them. I am very confident when standing over the ball and have had good success on the course. I’m not even thinking of replacing them, but I will probably upgrade the grips soon.