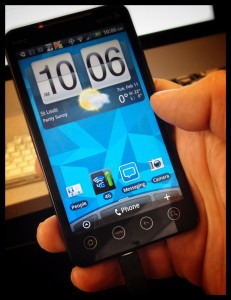 I’ve been waiting several months for my Freedom Phone and after a lengthy period of back order limbo it finally arrived. It’s a reconditioned HTC Evo 4g Android phone that I bought for $84. “Hold on!” I hear you blurt, “I thought you said it was free.” True enough–the phone was not free but there are no monthly service charges unless you opt for an upgrade. The basic package offers 500 minutes of calling, 500 texts and 500mb of data all using the Sprint network. That is free. I have a deluxe plan that gives me 1gb of data per month for $10. I’m living large.

During the ordering process I got to pick a number from my area code which is nice, though I don’t want to use that number; I want to keep my old one. Freedom Pop doesn’t let you transfer (or port as the lingo has it) a number but there is a workaround. If you use Google Voice (buried deep in your Google Apps) you can port an existing number for a one time fee of $20.

I added the new phone’s number to a list of numbers in Google Voice that will ring whenever my old phone number is dialed or texted. One slight downside is that the new number (not my old faithful one) will show as the return number, but I don’t consider that a big problem. Setting it all up is a bit of a techie challenge but far from insurmountable. I’d give 3.5 of 10 clicks on the Geek-o-Meter that I just made up with 1 click being ‘dead easy’ and ten being ‘don’t even think about trying this without a degree from Stanford or MIT.’ This could be the beginning of a great ‘stick it to the man’ endeavor!