[2020 UPDATE: the latest article about ESG noodeling is here.]

I am stoked about this almost two year old article from the New York Times Magazine about cold sesame noodles and the longing for and history of same.

Here’s the back story. This is the 30th anniversary of my first NYC visit. Within hours of entering the city I was turned on to cold sesame noodles at an Empire Szechuan restaurant on the upper West Side of Manhattan. For a midwestern lad, it was quite a revelation. I didn’t want to get on the plane and go home after that. Seriously, I was hooked.

I moved to NY soon after the aforementioned trip and lived there all too briefly while going to music school. Replicating the cold noodle experience has been a bit of a Holy Grail thing for me. I’ve found dozens of recipes online, dug through cook books and magazines and made many dishes basically to no avail. What’s more, there’s no joy in ordering up at Empire Szechuan on my trips to NYC–the current offering is not even close to the storied noodles of yesteryear.

I was recounting this story to a friend and she jumped on Google and sent me the above article in minutes. Apparently I’m not the only one with sesame noodle nostalgia. I recommend you read the whole thing (there are useful notes on ingredients) but if you’re eager to dive in and make some noodles, I’ve copied the recipe below.

1. Bring a large pot of water to a boil. Add noodles and cook until barely tender, about 5minutes; they should retain a hint of chewiness. Drain, rinse with cold water, drain again and toss with a splash of sesame oil.

3. Pour the sauce over the noodles and toss.

Transfer to a serving bowl, and garnish with cucumber and peanuts. Serves 4. 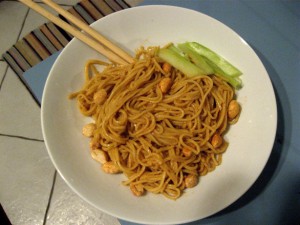 What’s the verdict? Well I must say they are pretty darn tasty, the best I’ve made yet. I had a couple of tweaks, though. The sauce was a bit light for a pound of pasta (I know it calls for 14 oz. but pasta comes in a pound so that’s what I made.) I added a couple extra tablespoons of peanut butter and at least another tablespoon of sesame oil. 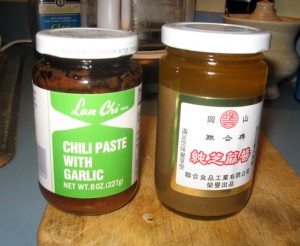 Also, here’s my two cents about it being like the Empire’s noodles. It isn’t, really. Here’s why: I remember the noodles coming out almost like spaghetti with red sauce. The sauce was on top of the noodles and the noodles were in their own sauce, which I suppose was mostly sesame oil. The next time I make these (and it will be soon) I will try it that way with some green onion sprinkled on top.