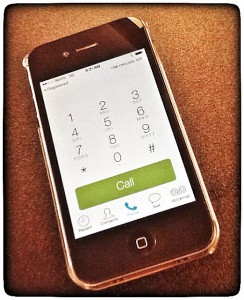 Since I wanted to keep the cell number I’ve had for years, I ported my trusty number to Google Voice (for a one time fee of $20). By logging into your GV account and editing the settings, you can add phone numbers that will ring whenever your Google number is called. It will also handle texts.

I installed the Talkatone app which gave me yet another number. That is the number I have Google Voice forwarded to; Talkatone is what rings. This setup works fine for incoming calls but Talkatone wants money for outgoing calls, which isn’t going to happen. For outgoing calls I use Google Hangouts, which works directly with my Google Voice number. But wait, I hear you say. Why not use Hangouts for incoming calls? Because for reasons dark and mysterious, it doesn’t work. For all of that I rarely make phone calls and texting, emailing and Facebook messages work great.

UPDATE 3/10/15: I gave the EVO phone to a phoneless friend. I reset it and had FreedomPop scrub it from their records so he could use their BYOD plan with that phone.