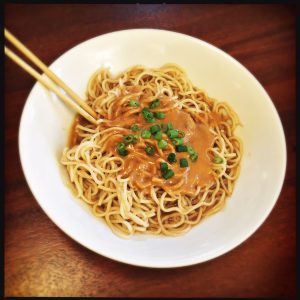 If you’ve read my 2013 post on this subject, Cold Sesame Noodles Revisited, or my even earlier post from 2009, you know that I’ve spent over 40 years trying to recreate the cold sesame noodles from Empire Szechuan Gourmet in New York. After reading my earlier posts, another passionate noodle fan reached out to me. His meticulous research and dogged pursuit of noodley goodness impressed me so much that I am turning this space over to him. Before I do, let me just say the product on his research is excellent. Are the noodles the same as I remember from long ago? Well, memory is fickle. I remember a darker, more chunky sauce, for example. Still, this recipe is the best I’ve found and I won’t be going back. If you can track down the recommended ingredients, make the top and bottom sauces and chill the noodles, you’ll have something crave-worthy that you’ll want to savor and share over and over again.

Ladies and gentleman, I turn you over to my guest poster, Kevin Kalajan. His web site is coldnoodlesandsesamesauce.com. If you want to skip his in-depth research and get right to the recipe, click here. 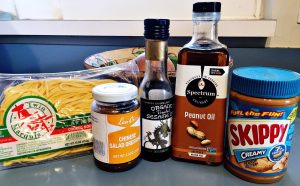 Peanut Butter
There are 3 potential options for the peanut butter: 1) “natural” with just peanuts and salt; 2) “modified” such as Skippy or JIF; 3) fresh ground.
The natural tends to be “too peanutty” and overpowers any added sesame flavor. Also, the sweetness (JIF and Skippy have added sugar) when combined with salt (from added salt and soy sauce) gives the eternally delectable sweet/salty combo.
There is some debate about “crunchy” vs. “smooth” peanut butter. This author recommends smooth, otherwise the nuts compete with the noodle texture.
Between JIF and Skippy, it appears that Skippy (smooth) yields vastly superior results compared to the original. JIF is oddly bland in comparison and is not recommend.
Roasted Peanut Oil
Roasted Sesame Paste
Make sure to use Chinese toasted sesame seed paste, not Middle Eastern tahini.
Cayenne or Chili Paste with Garlic
Toasted Sesame Oil
Make sure to use toasted sesame seed oil (sometimes refered to as “roasted”). If you want the dish particularly spicy, then you can use spicy sesame oil or control the level of heat/spice with cayenne. This author believes that cayenne offers flavor in its heat and is more authentic. Beware: do not use chili garlic paste as it is likely too hot and imparts too much salt and overpowering flavor.
Salt (vs MSG)
There is some belief that MSG is used vs. salt. Some people have concerns about MSG. The dish is NOT listed in the Empire Szechuan “MSG-Free” section of the menu, hence it probably does have MSG. Add if desired.
Garlic
The current version (depending on restaurant) doesn’t appear to have garlic but a small amount of finely chopped garlic does impart a terrific flavor to the dish (for those who enjoy raw garlic).
Sauce for 2 servings of Noodles:
2 TBSP Skippy Peanut Butter
1/8th Tsp Cayenne
1 TBSP Toasted Peanut Oil
1 TBSP + 1 Tsp Roasted Sesame Oil
1 Tsp Roasted Sesame Paste
1/8 Tsp Salt (or MSG if preferred)
VEGGIES
Finely-chopped scallions (green onion)
Thinly sliced cucumber (skinned, optionally de-seeded)
It is important to not overpower (both in flavor and texture) with a myriad of vegetables. That is why the original dish contained, at most, scallions and cucumber. Often Internet-based recipes add many vegetables, most likely to increase the interest of the dish given the likely bland (or vinegar-overpowered) version.
FINAL PREPARATION
Place chilled noodles in bowl.
Pour bottom liquid over noodles,  just enough that the liquid pools at the bottom, approximately 1/3rd cup per serving (more is OK but dilutes the top sauce).
Pour “top sauce” over noodles, as much as is desired (e.g. 4 TBSP per serving).
Put 1-2 TBSP chopped scallions and 4-5 sliced cucumbers on top.
Mix with chop sticks or fork.
Enjoy