It’s been over two years since I posted anything on these pages, but as we’re clawing our collective way out of a pandemic, it’s a good time dust off my blog. This entry is about reconnecting with an old friend who moved back home town to St. Louis after decades of living out of town.

I can barely remember meeting Kevin Harlan the first time. I would have been around sixteen years old and just beginning my adventures in concert percussion. My teacher, a young Tom Stubbs, sent me to Kevin’s little drum shop in north St. Louis County to get a couple of standard texts for would-be orchestral drummers: Saul Goodman’s Modern Method for Timpani and Mo Goldenberg’s mallet book, another “modern method” that isn’t modern now and wasn’t particularly modern then.

As I recall, Kevin’s shop was in a little white frame building. He was a cool guy with an impressive afro and was happy to sell me the books. I still have them. Well, not the Goodman book. It disintegrated over the years and I had to replace it. For some reason, (probably having to do with my lack of money) I never bought one of the tambourines he made, but they were used regularly in the St. Louis Symphony and I heard them a lot, first as an audience member and later as an extra percussionist.

Eventually I bought a decent tambourine. It was made by Frank Stoessel and I bought it while I was studying at Juilliard at a favorite spot: Drummer’s World on West 45th Street in New York. It had phosphorous bronze jingles and a very dry sound which cut nicely through a large orchestra.

Now we jump up to the twenty first century. For the first time in a long time I made a pilgrimage to PASIC in the fall of 2021 to meet up with my old friend John (aka Johnny Duke) Leister, a busy NY/NJ free lance percussionist and drummer. We donned the provided earplugs (a necessity, as unbridled testing of the wares by prospective buyers was incessant) and worked our way through the stalls. One of them belonged to Harlan Percussion. I was only vaguely aware that Kevin was still making instruments but he is and they are beautiful. I recounted the story of our youthful meeting, but he, not surprisingly, didn’t remember that. We did know a lot of the same people though, and he told me that I should look him up, as he was moving back to St. Louis in the near future.

I didn’t look him up right away, but when I saw a link to his snare sticks on Facebook I bought a pair online. The sticks carry a nostalgic appeal because the are inspired by the shape and style of an earlier era, one that I have a connection to. One model is inspired by the original Saul Goodman snare sticks and I distinctly remember seeing an original pair in Tom Stubbs’ basement long ago. They were rather long, probably maple, with a short taper and an elongated tip. The name “Goodman” was burned into them. I had no idea who “Goodman” was at the time, but I was drawn to them immediately. Of course I couldn’t get a pair; they weren’t mass produced items. I made do with some Vic Firth generals (not bad, by any means) and eventually got several pairs of Goodman sticks that were, in fact, mass produced by Calato. Even those are hard to find now, and are sought after.

But there’s more. Kevin is selling another vintage snare stick based on the design of Richard Holmes, the late, long time timpanist with the SLSO and another former teacher of mine. His sticks are similar to the Goodmans (he was a student of his, after all) but a little shorter and with a different tip. When I sent my payment, Kevin noted that I was in town and asked if I wanted to waive the shipping and stop by his headquarters for a tour and to pick out my own sticks. I jumped at the chance.

Kevin met me at his workshop and I reintroduced myself. We talked a lot about mutual friends and fandom of SLSO (and many other) percussionists past and present. I ended buying both the Holmes and Goodman model sticks. They are made of east Asian rosewood, which is a beautiful dark wood and not endangered like Honduran rosewood. The Goodman model is on the top and the Holmes model is beneath them.

Kevin’s specialty are tambourines. I used to play a lot of tambourine parts but lately I haven’t had to use my collection much. Still, I told him about the old Stoessel tambourine from Drummers World and how it had suffered an injury when a pipe broke in my house and partially flooded basement. He offered to fix it for me and I took him up on it. It turns out that he did more than fix it, he gave me a new shell made of ash that he sourced from Cooperman, the first name in all things frame drums. Then he installed a calf head impregnated with rosin to enable easy thumb and finger roles. Finally, Kevin fixed my old tambourine and threw in a set of basic steel jingles so I went home with two working tambos. 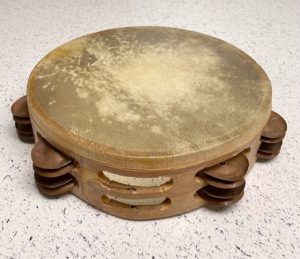 The new Cooperman shell with the original jingles. 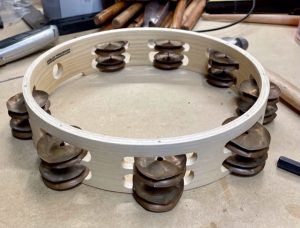 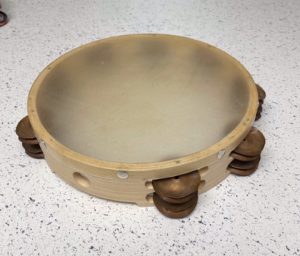 The last thing I got was a jingle ring for my hi-hat. 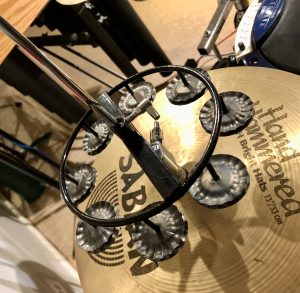 This is something that I use a lot on my hybrid drum kit. It’s a set of jingles that clamp over the top hi-hat cymbal that can be played with a stick or jingle sympathetically when the hi-hat is played with the foot.

Here we are in Kevin’s showroom. That’s me on the right. 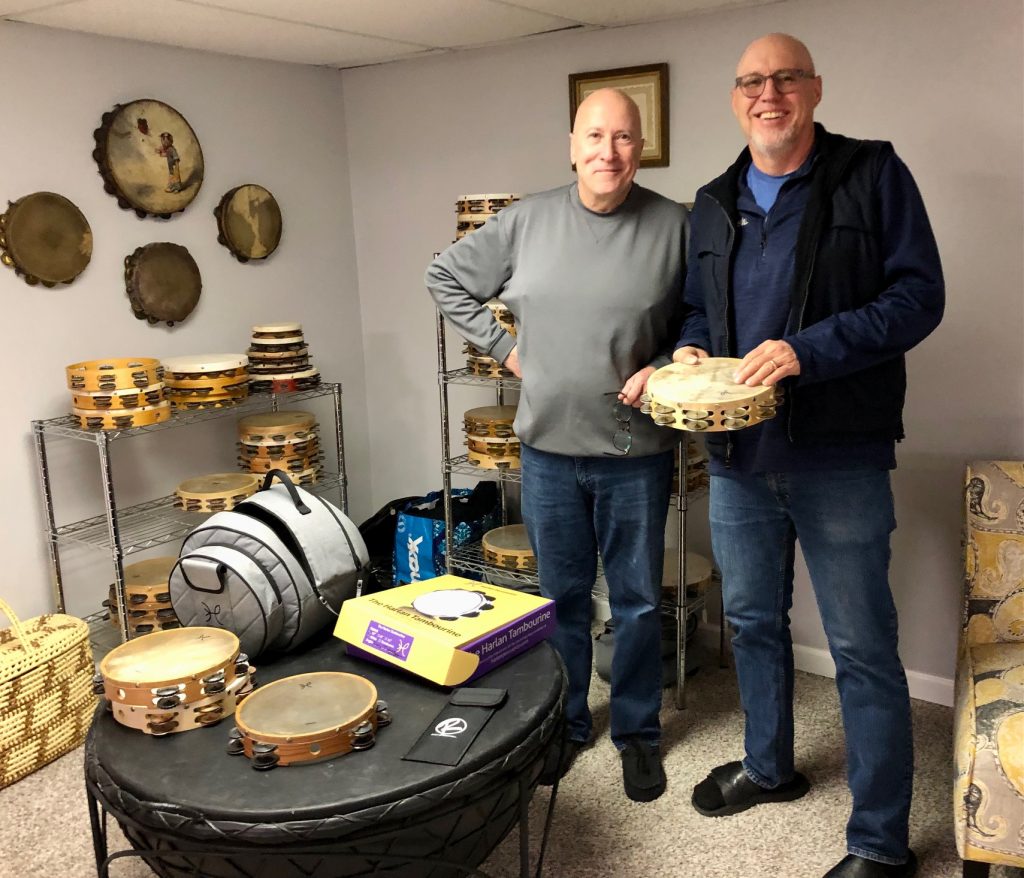